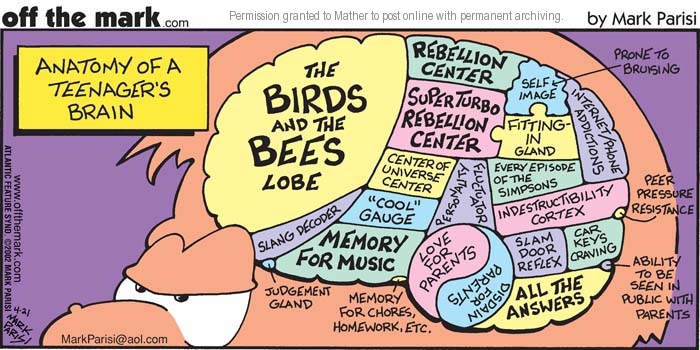 Until fairly recently, it was generally believed that that the brain was pretty much done growing by adolescence. However, twenty-first century technology has allowed scientists to make an amazing and somewhat startling discovery. The brain grows just as much during adolescence as it did during early childhood.

A Parable of Forgetfulness

You may notice that your child seems to be getting more forgetful and less organized as he or she enters adolescence. One parent of a bright and reasonably well behaved sixth grade daughter tells the story of upcoming Girl Scout meeting. Mom realized that she would be unavailable after school on the Thursday of the meeting. She reminded her daughter of the regularly scheduled monthly meeting on the Tuesday before.  She again reminded her daughter of the meeting on Wednesday evening. Before her daughter left for school on Thursday, mom asked her where she needed to go after school that day. “Girl Scout meeting,” her daughter promptly replied as she walked out the door. On Thursday, Mom walked into the Girls Scout meeting at pick-up time. She scanned the group of girls but her daughter was not among them. She asked the leader if she had been there. No, her daughter had not arrived at the meeting.  In desperation she called home. Her daughter immediately answered the phone. “Why aren’t you at the girl scout meeting?” asked her panicked mother. “I forgot,” responded the daughter.

Why is this such a common scenario for parents and kids of this age? Because the brain of a young adolescent is expanding so rapidly that it is inefficient. Think of a boom town where expansion is happening almost faster than the builders and electricians can put up frames, install wiring, and clear out debris. The adolescent brain is something like this town – the building work needs to be finished, the worksite needs to be cleaned up, and all the tools need to be returned to their places before residents can move efficiently through the town.  Similarly, the teenage brain goes through a process of eliminating little used connections and strengthening the efficiency of those pathways that are most often used.  The reason that your teen can seem disorganized in their thinking is that their thought processes take a more disorganized route.  As they develop, their thought processes become more efficient: they are capable of better organized, and tend to forget less. This process of building and clean up will continue throughout the teen years into a child’s twenties.

What can parents do about it?

The first step is acknowledging that it really is happening and your child is probably not intentionally being irresponsible or defiant. Although time will eventually take care of the issue, you can support your child in the interim by modeling responsibility and gently but firmly help your child to be better organized and accountable.

Our readers probably have many examples of how they have experienced forgetfulness among their own children as well as strategies and tips for how to cope. We encourage you to share your struggles and survival techniques with one another in the comment section below.

Become a member of the  Parenthetical community to comment

If you’d like to learn more about the teenage brain, check out The Wiring of the Adolescent Brain from the PBS Frontline series on Inside the Teenage Brain or the National Institute on Mental Health’s brochure, The Teen Brain: Still Under Construction.

Becky has worked with adolescents and their parents over the last 20 years, primarily as a youth director in a church setting. She recently returned to school and completed her masters degree in Human Development and Family Studies at the University of Wisconsin -Madison. She has a husband, three children ages 24, 20, 12 and lives in the country with a menagerie of pets. Though she did not have a particularly rebellious adolescence, she and her parents remember the emotional turmoil of that time vividly. When she is not spectating at a child’s activity or volunteering as a local school board member, Becky loves to ride her horse, jog or attend the theater.